A Bash script that backups the directories specified and manages old backup files.

This shell script backups the directories specified in the CONFIGURATION SECTION by compressing and storing them. It is designed to be executed @midnight (same as @daily) using Cron. 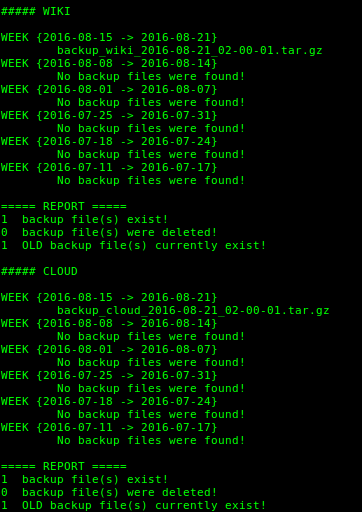 The configuration section is the only section you should modify, unless you really(!) know what you are doing!!!

Make sure to always comply with the name format of the example variables. As you may have noticed, all variables related to each other begin with the same token (i.e. WIKI, CLOUD, …).

To add any additional directories to be backed up, you should only add three (3) new lines and modify ${TOKENS} variable. See the examples below to get a better understanding.

Template - The three lines that should be added for every new directory addition.